Tourist complex Ivanova Korita is located at an elevation of 1.250 m, 15 km west from Cetinje, on the National Park Lovćen southern edge. The complex is surrounded by old pine and beech forests and offering a beautiful view on the Lovćen mountain.

Due to the location where continental and Mediterranean climate collides, Ivanova Korita represents a special air spa that has a beneficial impact on the visitors’ soul and body. A unique mixture of marine aerosols and mountain air particularly favors people with respiratory problems.

The complex consists of four buildings and numerous sports fields. It’s made up of the hotel “Ivanov konak”, a children’s resort (Recreational-Educational Center “Lovćen”), villa Palac, and a Lounge bar. In addition, guests can use free parking and hotel garage.

Hotel “Ivanov Konak“ is categorized with four stars, it has 500 square meters, and it was opened at the end of 2007. Like the whole complex, it was named after Ivan Crnojević, founder and first lord of the sub-Lovćen Montenegro. The hotel has comfortable furniture in five studio apartments and two double room with its own terraces, which due to the fantastic panoramic view of the Lovćen represent viewpoints. Room furniture is designed in rustic style and at the same time offers comfortable, but also an intimate home atmosphere.

The oldest building in this tourist complex is King Nikola’s Villa, today called Palac villa. It was built in 1896 and a new floor was added in 1905. Complete adaptation of the facility was made during 2009, and today is a representative 360 square meters’ villa. A beautiful garden with a picnic area and the other amenities for a pleasant stay in nature is included in the facility.

The comfort of the complex completes a 60-seat dining room built in a traditional Montenegrin mountain style. There is also a cafe bar with 30 seats and summer terrace that can accommodate 120 guests. The menu is made primarily of traditional Montenegrin cuisine, but culinary specialties’ known and recognized throughout the world are also not neglected.

The hotel surrounding is intersected with numerous hiking and biking trails, and the complex has equipped basketball, volleyball, tennis and football fields, so it is an excellent destination for the sports teams’ preparation. 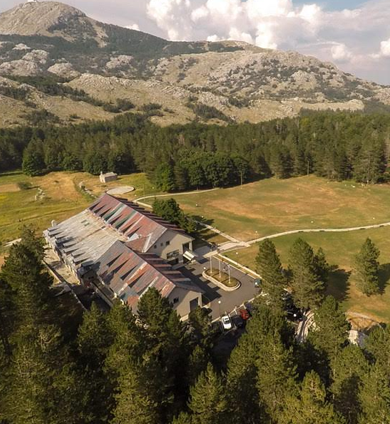